skip to main | skip to sidebar

THE RECIPE (COURTESY OF ABOVE REFERENCED BOOK):

1 package wide, flat rice noodles (10 oz.) [Trader Joe's package was a little bigger - 13.25 oz. if I remember correctly...Therefore, I was generous in my measurements for the rest of the ingredients] 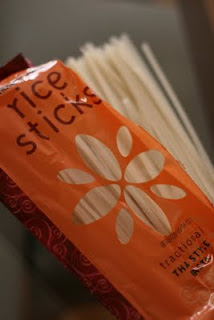 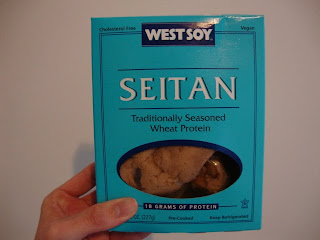 1 large carrot, shredded [I used a box grater; seriously considering purchasing a large food processor with a grating blade...]
2 handfuls of cashews, crushed
__________________________________
1) Cook rice noodles according to package. Prepare peanut sauce by whisking together the soy sauce, PB, lime juice, sugar, chili flakes, and ginger powder.
2) When finished cooking, rinse noodles with cold water. Drain well. Use kitchen shears to cut noodles into bite-friendly pieces, then set noodles aside.
3) Heat oil in a wok over high heat. Add kale and cook until cooked through and browning in some parts. Add seitan strips and carrots, and then turn down heat a bit.
4) Add noodles, sauce, then crushed cashews. Serve!

WHAT THE HELL IS SEITAN? I have seen seitan used as an ingredient in quite a few recipes and have been intrigued. It looks gruesome, but is pretty awesome. According to the package, "seitan is a low-fat, high-protein alternative to beef and poultry." Its vegan, cholesterol-free, and has only 1 gram of fat per serving! It is made from wheat gluten. The seitan was tasty, but it still freaks me out a little.

The yield on the recipe was easily enough for 4 to 5 people. Next time, I’d reduce the recipe by half because as is, I have leftovers up the wazoo.

Playing around with the proportions would result in a healthier version. As is, the recipe is fit for a carbohydrate queen. Next time, I’d add much more kale and carrots – I might even try to make this a kale-based dish, rather than a noodle-based dish (that is, having kale be the main ingredient and the noodles the accent ingredient, rather than vice versa).

The seitan coupled with the cashews lends a lot of protein to this dish! (Ma, where’s the PROTEIN?!) Overall, it was a decent dish. 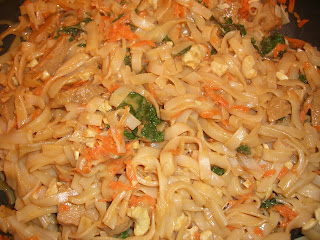 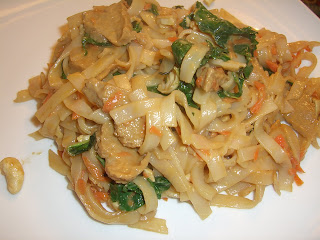